A Next Step Study on a Bible prophecy.

In worship this morning, we listened while John, the prophet who saw the vision in the Bible book Revelation, described what he saw of Eternity.

We learned that through the Bible Prophets, we are given visions to ponder that point us to eternal truths.

John's vision of Heaven - the Eternal Truth of Heaven! - gives us courage to live knowing that we are bound for eternal glory.

Now let's apply the same techniques we learned about Binge Reading Bible Prophecy as we read about the great and final Last Day... the "Day of the LORD".

Joel was a prophet of the LORD.

Furthermore, the human kings during his lifetime were faithless and corrupt, and Israel was beset with weakness and would ultimately be decimated by invading Assyrians.

Into this kind of world, God inspired Joel to write visions of a great "Day".

Let's listen to the words Joel uses to describe it. 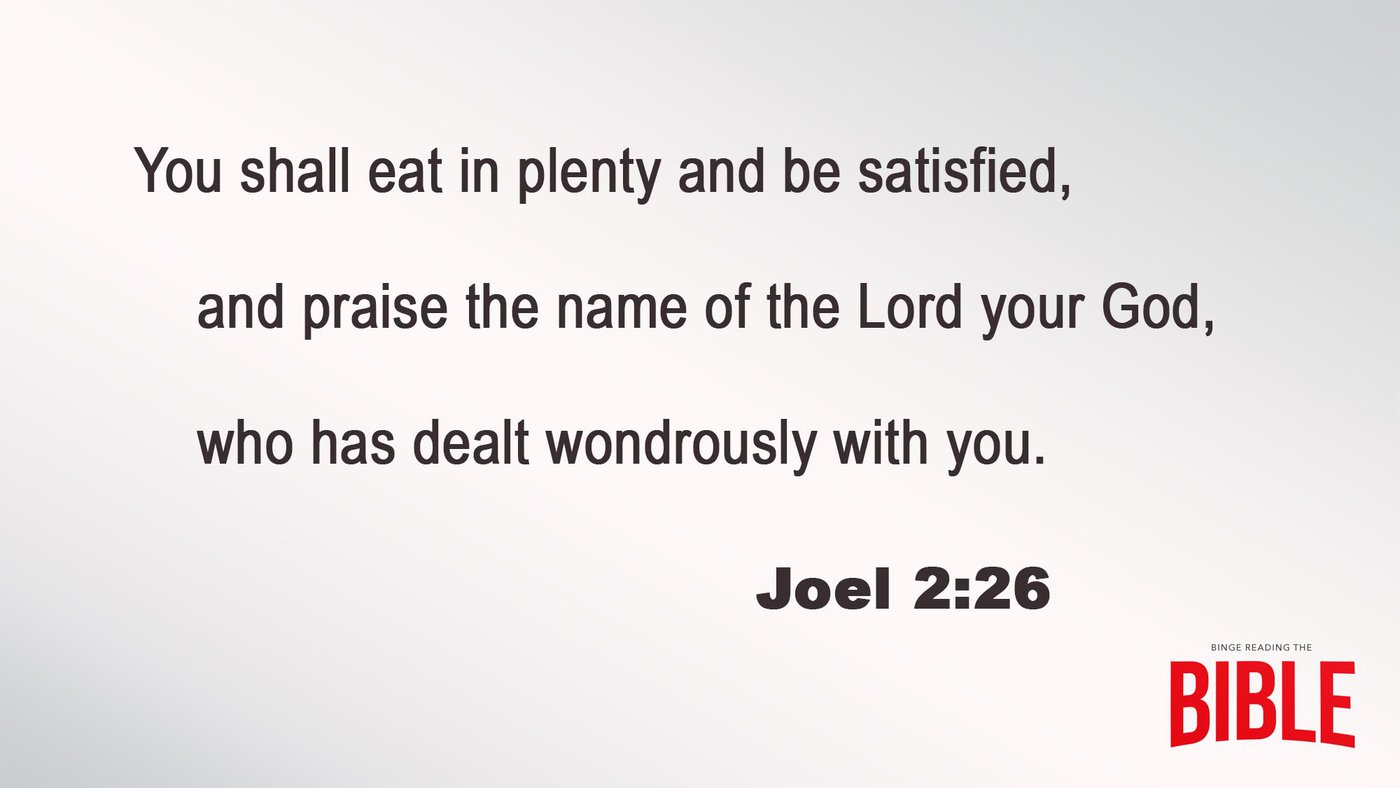 What is being imagined?

We learned that the visions given to the prophets are of a divine nature, and that human language is not fully adequate to describe them. Yet these prophets must use words.

At first, we might think about the real problems of hunger and food supply. This prophecy is intended to mean something in the context of not having enough to eat right now.

What images are evoked in your imagination when you hear of a situation where hungry people can "eat in plenty and be satisfied" on a permanent basis?

The Thanks and praise belongs to the lord

The Great Day of the LORD will put an end to THAT kind of hunger!

Those longings won't simply disappear, they will become satisfied; fulfilled.

Have you ever thought about all of the ways you hunger for God and for true freedom, peace, and joy?

Re-read Joel 2:26. Why do you think Joel sees "the Lord your God" as the one receiving thanks and praise on that Great Day?

he has dealt with us wondrously

Sometimes people begin to feel despair when they start to think that God is delaying ALL of His blessings until some future day. It's sometimes easy to forget that he is "dealing wondrously" with us right now.

List as many ways God has blessed you "wondrously" already in your life?

Protip: don't forget to include things like "he died and rose again for me", "he has given me fellowship with other believers", and cool stuff like that...

Good News for all people

We always want to study a bible verse in the context of the chapters and verses around it.

"And it shall come to pass that everyone who calls on the name of the Lord shall be saved."

This wasn't just a message pertaining to 8th century BC Israelites. Joel shocked his audience by reminding them that it has always been God's plan that salvation in Jesus be open to all people.

Joel's divine vision of reality shows us that salvation is a free gift of God that anyone may receive.

Knowing this, write down a prayer asking God for the opportunity and courage to share this good news with someone else.

HCLC is a member congregation of The Lutheran Church - Missouri Synod.